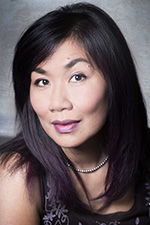 Dolores Scott is a gifted musician whose mastery of the art of singing continues to bring her before audiences both nationally and internationally. She has performed in an extraordinarily diverse variety of styles and settings: as opera lead in the soprano roles of Rosina in The Barber of Seville (Burnaby Lyric Opera), Musetta in La Bohème and Josephine in HMS Pinafore (Tri-Cities Opera, Binghamton, NY), and Pamina in The Magic Flute (Western Washington University); in music theatre, she was critically acclaimed for her portrayal of Tuptim in The King and I (Richmond Gateway Theatre); and as soloist with symphony orchestras, including the Oneonta Symphony, the Vancouver Symphony, Burnaby Symphony and Sinfonia of the North Shore. She has also toured throughout Hungary and Germany as a soloist for several Early Music ensembles and choirs.

Dolores’ most memorable experiences with Vancouver Chamber Choir include having the honour of performing for Emperor Akihito and Empress Michiko of Japan, singing “Baby, It’s Cold Outside” with Canadian opera superstar Ben Heppner, and working with Eric Whitacre. Dolores’ first vocal studies at the post-secondary level were in jazz; she ultimately graduated with a Master’s degree in music/opera from State University of New York at Binghamton where she also taught voice, and where she was a resident artist with the Tri-Cities Opera.

Since joining the choir, Dolores has found the experience to be an exceptionally satisfying challenge. She holds true admiration for the high musical standards of her fellow singers and is consistently inspired by the choir’s repertoire, which she feels privileged to sing.

Back to Singers
Fabiana Katz